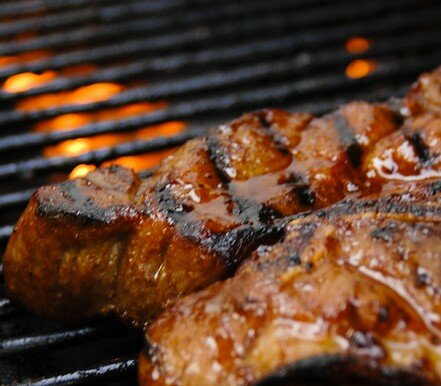 Moist meat cooking on the grill

Many of us think that grilling is the healthiest and most natural way to eat meat. What could be more natural than throwing meat on the fire right? Well, it isn’t quite so simple. The grill can easily dry out and overcook the meat, making it harder to digest and even taste less flavorful.

Overcooked meat is tough because of what happens to the fat, protein, and sugar molecules; they get fused together, making them difficult to cut, chew, and digest.

Heterocyclic amines are formed when meat is cooked at high temperatures and polycyclic aromatic hydrocarbons (PAH) are formed when fat and juices drip onto the open fire, causing flames. These flames then contain PAHs which adhere to the surface of the meat. Both of these compounds have been shown to cause cancer.

The amino acids in the meat are very sensitive to heat and can be easily damaged. The amino acids, plus the oxygen and iron that is in our blood can all react, which creates fusions between the molecules. This creates toxins that your body can’t use, but you’ll absorb anyway.

Once in your bloodstream, your liver and kidneys will have to eliminate them, which is an added burden for these organs. Even worse, ruined nutrients, or carcinogens, cause reactions between other nutrients and wreak havoc on our bodies, leading to cancer and inflammation.

You probably know that I like to eat a lot of my animal foods raw but there are some meats which are not at all easy to digest this way, namely, the muscle meats. The reason is because they are tough and in order for our digestive systems to easily use them they need to be broken down in some way. This might be accomplished with an acid such as vinegar or lemon juice, fermentation (as in dried or rotted meat), or by cooking.

Hydrolytic cleavage is the process by which moisture trapped inside the meat while cooking actually slices the strands of protein, thereby tenderizing the meat. Additionally, this trapped water prevents proteins from fusing together and making the meat much less digestible.

How to Properly Cook Your Meat

In order to avoid the toxins created in the cooking process, you should cook your meat with moisture either from water or from fat.

You know your meat is overdone when you slice it and don’t see drips of moisture. Check the meat often and take it off the fire before it dries out.