How did Primal man/woman do poop? They didn’t have toilets so did she sit on a tree branch and dangle her feet in the air, letting her excrement fall into some hollowed out tree stump? Did he build a chair with a hole in the middle and stand it up over a hole in the ground? Did they stick their behinds out, like some animals do, and drop pellets?

Or did they squat just like we do today when we go camping? Yep. That’s it. Squatting is our evolutionary ticket to easy pooping. Our bodies have been trained to do it that way and only that way for a million years.

Yet somehow westerners think we can change that evolutionary programming and just start pooping up in a high chair with absolutely no consequences.

I suppose maybe you can if you have inflammation under control, don’t have food allergies, don’t have any carbohydrate malabsorption issues, eat ample healthy bacteria, aren’t stressed out, haven’t accumulated any heavy metals, aren’t magnesium deficient, drink enough water, and don’t take drugs of any kind. Did I miss anything?

Our modern lifestyle really gets in the way of easy bowel movements!

Good digestion not only requires good health but it requires good habits too and one of those habits is squatting. The only problem with this is that our toilets are built like dining table chairs. They are very high. For children they are truly barstools.

I used to use a small step stool to prop up my feet a bit. I even tried putting my feet up on the toilet seat, (rather precarious) but neither felt very natural.

The people at the changed all this. They understood that they aren’t going to replace a billion toilets in this country so instead they sought to jerry rig them – build a higher floor round the toilet.

A regular stool don’t do the job because when we squat we do not put our feet up against our chests, but rather off to the side. The is long enough across the toilet to accommodate this stance.When you use it you’ll know instantly how natural it is. It makes going number two a real pleasure. Not only is this posture more comfortable than sitting but it helps to lengthen the colon, eliminating kinks and obstructions.

Of course wasn’t the first to think of squatting at the toilet. They are just the first to bring the squat to America. People in other countries have lower toilets than we have. Some, like Japanese toilets, are all the way on the ground. 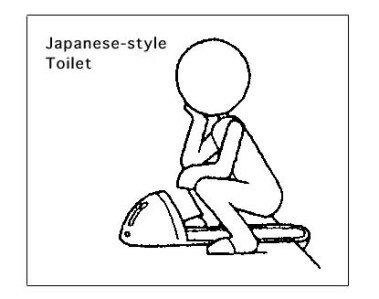