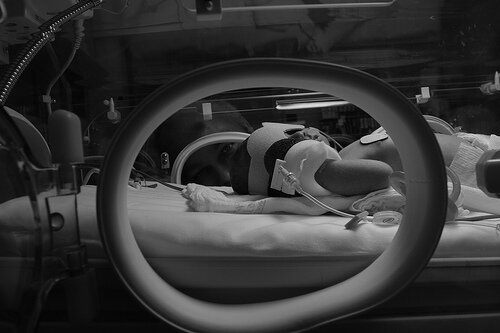 Premature baby, alone with no sound of mother’s heartbeat or rhythmic breathing.

Kangaroo care was invented in the late 1970s by Dr. Edgar Rey in Bogota Colombia as a response to the extremely high death rate of preterm babies at his impoverished hospital.

Rey’s NICU department did not have enough incubators for all of the preterm babies and few of them survived. Asking for money probably wouldn’t get him anywhere so he started thinking creatively.

He reasoned out a solution that would change the fate of preterm babies all across the world.

What are incubators for, he asked himself? To mimic a mother’s womb by offering the baby constant warmth, nourishment, and oxygen. Well, Rey thought, a mother herself could probably offer the same if not superior incubation. He may have not known exactly why this was true at the time, but indeed, it was true. The method was so successful that it spread to other third world nations and has since been studied extensively and even adopted by many developed nations.

Babies are placed skin to skin against a parent’s chest 24 hours a day (probably less in developed nations where incubators are available). The baby is kept upright to prevent reflux and apnea. They wear a hat and blanket on their backs. Those that need it will receive an IV and oxygen right on the mother’s chest. As soon as the baby is able to start sucking, it will nurse.

Conditions are said to be fair to return home if the baby is pink, can suck, and breath on its own. This generally happens much faster in kangaroo cared infants than in conventionally incubated infants. Sometimes preterm babies and their parents go home the next day.

Holly Richardson said in an article entitled Kangaroo Care: Why Does It Work? published in Midwifery Today,

“Researchers have gained significant insight into what happens to an infant’s brain during kangaroo care. Any baby’s heart rate and respiratory rates can be plotted as a sort of artistic drawing. Because premature infants lack the ability to coordinate their breathing and heart rates, the rates “plot out” as chaotic. This means with increased demand on the cardiovascular system, as with crying or fussing, the system does not respond with a related increase in cardiac output. In other words, the baby’s respiratory rate may increase while crying, but the heart rate does not. As preemies mature, these rates become synchronized, or “coupled,” resulting in an orderly drawing when the rates are plotted together. The drawing no longer looks random.

In infants in kangaroo care, researchers found that coupling takes place after only ten minutes. This hardly seemed possible because it equaled four weeks of brain development in the “normal” preemie. As researchers studied brain wave patterns of infants in kangaroo care, they found two significant things. First, there was a doubling of alpha waves—the brain wave pattern associated with contentment and bliss. Second, they found that “delta brushes” were occurring. Delta brushes happen only when new synapses are being formed. So holding the infant skin-to-skin allows his or her brain to continue its work of developing neural synapses.”

Why Incubators Aren’t the Best Option

Is Preterm Labor Really So Bad?

All of this makes me wonder, do preterm babies suffer so many hardships such as cognitive difficulties later in life because they are preterm? Or is it because preterm infant care is not very good? Infants who don’t sleep enough, don’t absorb nutrients well, don’t feel safe, aren’t warm enough, and are subject to the chemicals in preterm infant drugs are not given the conditions necessary to develop properly.

How Early is Too Early for Preterm Home birth?

The choice to have a baby at home when it comes before 38 weeks gestation is a decision only the parents can make. Many midwives won’t deliver babies any earlier than 36 to 37 weeks, though some will attend an even earlier preterm birth.

The greatest risk for premature babies is respiratory problems, though when they are delivered vaginally, the risk decreases significantly. Midwives generally bring oxygen to births and if further support is needed, the baby can be transported to a hospital via ambulance, which can administer oxygen.

I think most of us are led to believe that preterm infants (before 38 weeks gestation) cannot survive outside of a hospital. This is often simply not the case and the use of kangaroo care around the world proves it. However, when a baby is at risk for complications, having a hospital nearby can be a life saver.