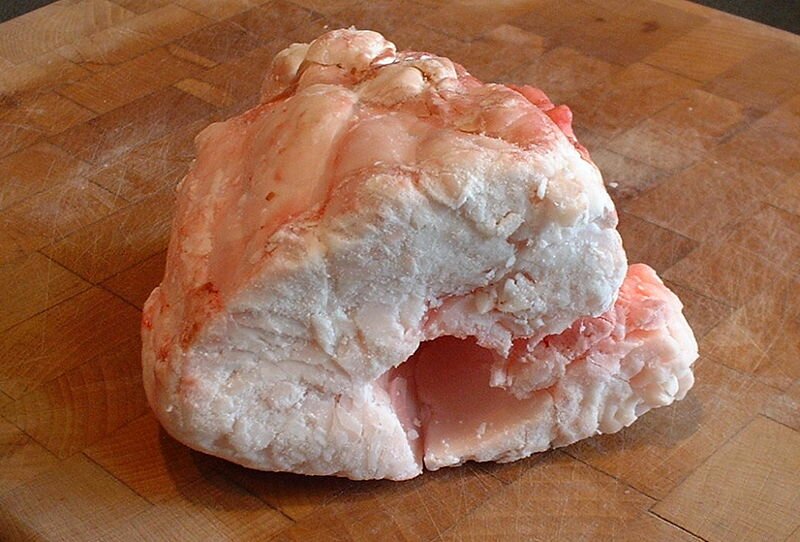 After writing about how much I love Pemmican one of our regular commenters, Grainne, thought she’d try making it herself since she lives in Ireland and can’t buy it from US Wellness. So she did and sent me an email about her adventures and her incredible success!

I want to mention that she made her own tallow straight from the suet (which is cheaper and sometimes free) but you could just buy the tallow and skip that step.

Hi Peggy.  So I made the pemmican, and it was really easy after all.  I thought it might be reading the directions, it’s one of those things that looks more intimidating than it actually is.  If you already make jerky – by the way, I used your directions for the jerky, and got the topside roast cut into steaks for me at the butchers – that’s half the battle.  The other half?  Throw the suet into a pot on the lowest heat you have on the stove-top, and wait for a bit.  If nothing happens, turn it up a notch.  Mine is electric, and 1 was perfect for it.  I stirred it two or three times over the course of a few hours, not really paying much attention to it, and strained it through a mesh sifter into left over jars – all 440z. of it.

I’d say half the cow is still in the fridge – the butcher, after days of me coming to see if the order that was supposed to be in Tuesday had finally come in, handed over a clear plastic bag containing 6.5 kilos of suet, (I’d ordered 1) and there’s me walking through Killarney town with 15 lbs of suet, and another 12 lbs worth of groceries.  I must have been a sight, but I lugged it all home and got to work straight away.

Also, my oven must not keep the right temperature.  It took the meat 18 hours to dry out, and I was up every two hours to make sure it was doing okay.  I was a tired woman at work, but I had my pemmican, which I made that morning in the few spare minutes before I left, to comfort me.  On the upside, I’m VERY sure all the enzymes are still intact in my meat, because I cut those babies thin before I put them in the oven, and they STILL took 18 hours to dry out.

SO!  Here it is.  You’re going to use equal parts tallow and ground jerky (1 cup powdered jerky, 1 cup tallow).

2. Make tallow (Primal parent here. I’ve thrown in a post from MDA for some pictures): Boil suet on low heat until it is a nice golden color, and the only solids are the tissue – I mistakenly thought that this would boil down, but again, wasn’t paying much attention to it.  When I really looked at it, I could see that all the fat was boiled down and that it was only what looked like bits of pork rind – you know, the stuff they sell in bags?

3. Strain suet through a mesh, cheesecloth, whatever you have.  It’s easier to scoop the bigger bits out first.  Don’t worry about straining a second time.  I’m assuming you’re not expecting this to last you years, and that you’ll be keeping your pemmican in the fridge.  The purity of the one time straining will be fine for this.

4. Grab your food processor and give that jerky the ride of its life. When it’s the consistency you want, add some salt and whatever seasonings you may want. Add some bone marrow too if you have it.  Give it another whirl to mix it all together.

5. Throw in your tallow.  Now, some people say to throw it in melted, but I say, it doesn’t really matter.  Melted, not melted, do it how you want it.  Mine just happened to have cooled over night and I wasn’t going to be bothered heating it up, so in it went.  Turn that food processor on one more time, or knead with hands, enlist daughters help, and have fun licking fat off your fingers.

6. Roll into balls, or spread over a dish and stick it into the fridge.  When it’s chilled, you can easily cut it into bars.  I did a plain one, and believe it or not, a chocolate one with a couple teaspoons of raw cacao powder and a few pieces of 85% dark chocolate.  It turned out really good, even though I added a bit too much salt to the chocolate one. The first time’s always for experimenting, see what you like.

It wasn’t that hard…

I have to say, that when I actually saw the suet, I wondered, how was I going to turn THAT into something so tasty????  It turned out to be darn simple.  It is creamy, and salty, and beefy and mmmmm….. Good!!!!!

The chocolate one is perfect for me because I’m really sensitive to sugar (meaning I’ve never been able to eat a whole candy bar in my life without feeling sick – yay for me in the end though), so the honey would be too much.  I LOVE chocolate, and the minimal amount of sugar in the two pieces of dark chocolate I threw in made it just the right sweetness for me.  Next time I’ll know not to use as much salt.  And I love the plain one.  It’s just so creamy and tasty.

So that’s it.  you’ll spend more effort reading this than you will making your pemmican.  So, thank you Peggy, for your article, as it inspired me to make something that will now be a regular part of my diet (breakfast just got a whole lot easier) and I hope you are inspired to try it.

A last note of inspiration

In the end it cost me 12 euros ($17) for a kilo (2.2lbs) of topside roast, which yielded almost 3 cups of jerky, or, 6 cups of pemmican.  If I had a bar every day, it would last a month or so.  I estimate the total cost to be about 15 euros.  I was shocked when the butcher handed over 15 lbs of suet, but I was pleasantly surprised when he said it was free.

Now, the next time I make it, I will know exactly where it’s sourced from, as I have been in contact with a farmer who does grass fed beef who will send it to me.  As it stands, I’m not to troubled about not knowing this time around.  As I’ve said before, the farming situation over here isn’t as critical.  Sorry no pictures, no camera.  Enjoy though.

Adding extras to the pemmican

Primal Parent here: I emailed her back, thanking her for her explication of her effort and she added this update:

This time, I got some marrow bones off of one of the butchers in town – not an easy thing when the hotels seem to have first dibs on them – and used the marrow and the fat off it to make my pemmican along with some Cajun spice, and suet.  I didn’t measure anything, I can just eye it now.  OH!!! I also dried some livers while I was making the jerky, and I put that in the pemmican.  Talk about a powerhouse of nutrients, liver, marrow, suet, jerky. I’m so excited about it.