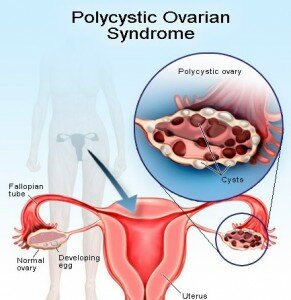 Your doctor probably isn’t going to tell you this, he’s probably just going to prescribe some Metformin and send you on your way, but PCOS is treatable with diet and lifestyle changes. No drugs are necessary. I spent most of my adult life with PCOS before it was well known enough to diagnose and I conquered it myself with diet. I spent years reading and experimenting with various health approaches until finally conquering this hormonal beast.

My history with PCOS

I started my period a couple of months after I turned 11. From that day forward I was depressed, angry, and shy.

I had all kinds of other issues on top of that. I had pica (eating non-food items such as chalk, dirt, and hair). I had diarrhea everyday. My mom took me to doctors to test for ulcers but when those tests came back negative she just kind of ignored it. I had menstrual cramps so bad that every month I would rock back and forth for two days in excruciating pain. My mom didn’t know what to do for me so she gave me Vicodin and hoped it would stop. Not she, nor her sisters, nor her first daughter 14 years before me had ever experienced anything like the symptoms from which I claimed to suffer.

The emergence of cysts – a clue?
When I was 14, I went to the emergency room with 4 cysts which had ruptured on my ovaries in unison (it was agonizing pain). But after the ultrasound confirmed that the cysts had ruptured, the doctors said I should be fine and those too were ignored.

I had other signs that something was wrong with my body. When I was 12 my hip joint fell out of its socket and I had to go to the ER to get it put back in place. They didn’t know why it happened so they sent me on my way (my hip and my shoulder continued to do this until I was 26, when I quit eating gluten).

Once I had a headache so bad I spent a night in the ER. The spinal tap showed nothing and so it too was ignored.

I looked so healthy despite the symptoms
I guess it might have been hard to take me seriously since I was such a pretty young teen. How could anyone so pretty and thin have hormonal problems? And so, I was eventually diagnosed with mental problems. All the cramps, the diarrhea, the pain, the joint problems were all in my head, so they said.

Since I was 12 it was the job of psychiatrists to fix me. How could they though when they’re patient was not mental but simply malnourished? (Psychiatrists don’t typically recognize the connection between the mind and the body. Depression and mental problems are avoidable and correctable.)

Acne was definitely not all in my head
When I was 17 it became outwardly obvious that something wasn’t right . I developed acne. By the time I was 21 it became severe and cystic. My mom now started sending me to doctors of all kinds – mostly dermatologists which are, for the most part, a waste of a good brain since all they do is treat outward symptoms and not even bother with cause.

After a while I ran into a doctor that prescribed the pill, which made my symptoms worse, and I tried 3 years of antibiotics, which never helped at all. I was handed a prescription and told to go on my way by every single doctor I ever saw. I went to probably 15 or more doctors in the Denver area in the late nineties.

More symptoms of PCOS started to surface
In 2003 my hair started to noticeably thin out and my acne became worse than ever despite the drugs I took for it. I applied Retin-A and developed terrible scaring. Hair growth around my body was very thick. I felt and looked so horrible I wanted to hide much of the time.

In 2004 I found out that I had celiac disease and started to realize that there was some kind of connection with what I put in my mouth and how I felt. This started a mission to save myself. (I had given up on doctors long ago. If anyone was going to help me it was going to be me.)

I started reading all the books I could get my hands on in my free time. I experimented with every type of diet. I read that milk causes acne (not always) and how the rise in insulin from eating sugar causes acne (not the whole story) and how reactions to topical products causes acne (bullshit) and on and on.

I finally got my hands on an ebook about PCOS because a Google search returned a list of PCOS symptoms that included acne. It gave me a clue about the connection and how I should be limiting carbs and grains. Not much later, I discovered Paleo.

PCOS is a hormonal imbalance. In women with PCOS the ovaries produce too much male hormones (androgens), making it difficult or impossible for the ovaries to release an egg. This leads to cysts on the ovaries and a host of troublesome symptoms.

1 in 15 women have PCOS
Around 5 million women in the US have polycystic ovarian syndrome and the number is growing as our lifestyles and diets become more and more artificial.

The cause of PCOS

While there are many factors which can predispose a woman to develop PCOS such as obesity, genetics, and exposure to synthetic estrogens, insulin resistance is the root cause of polycystic ovarian syndrome.

Insulin resistance arises from long-term elevated blood sugar levels which the pancreas tries to keep in check by releasing insulin. Over time, the cells become desensitized to it and blood sugar regulation is impaired. Eventually this can lead to diabetes.

How insulin leads to PCOS
Insulin helps glucose pass through the cell walls. When cells become resistant to insulin, the glucose must make its way to the liver to be converted to fat instead of being used as energy by the cells. This is why women suffering from PCOS often are often (but not always) overweight.

Insulin resistance leads to an excess of androgens. When the cells are desensitized to insulin the pancreas produces even more than is really needed, thinking that the reason the cells aren’t taking the glucose is because there isn’t enough insulin. Now you have excess insulin floating around in the bloodstream. This free-floating insulin stimulates the ovaries to produce excess testosterone. This prevents the ovary from releasing the egg each month (a leading cause of infertility).

Xenoestrogens
Pollution, exposure to plastics, other chemicals, and conventional beef treated with synthetic hormones can also contribute to hormonal imbalances because they contain xenoestrogens (synthetic or environmental estrogens). These environmental estrogens wreak havoc on our delicate hormonal processes by tricking the body into thinking that there is too much estrogen, causing it to produce excessive amounts of other hormones in attempt to balance it out.

Like with every other modern health condition, PCOS can be avoided and controlled by diet and lifestyle changes. (Genetics can predispose a person to develop the condition but genetics is rarely the cause of disease.)

Insulin resistance is a totally avoidable and treatable condition.

After learning about grains and sugars, I discovered Loren Cordain’s book, The Paleo Diet. My health improved immediately and within 3 months I was pregnant. It was amazing that I was starting to get my hormonal problems under control but, unfortunately, a return to an evolutionary diet was not the whole solution for me.

So I started taking vitamins, minerals, and hormone balancing herbs. I stopped over-exercising. I did all the things that I read should take care of the problem. But I still didn’t fully recover – many of my hundred symptoms improved but not all of them. For years, even after going Primal, I struggled with (minor by this point) PCOS symptoms.

Controlling Insulin Can Be Complicated

« The Carnivore’s Dilemma – A Diet of Just Meats and Fats? Pemmican, Oh Pemmican – How Do I Love Thee? »