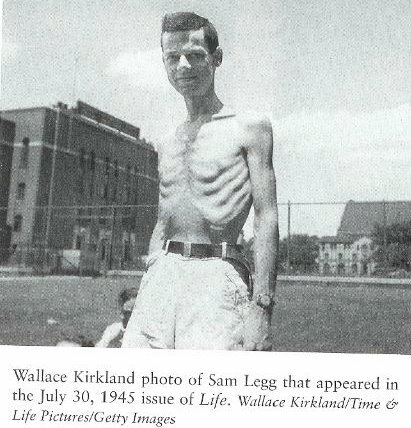 This man starved eating a high carbohydrate diet consisting of 1570 calories a day.

While I was reviewing the research available on intermittent fasting I came upon an article on Tim Ferriss’ website about the science of fat loss and the “calorie is a calorie” myth. He invited Dr. Eades (author of Protein Power who has worked for 2 decades on low-carb dieting) to take the stage and compare two studies on diet which employed vastly different methods and produced vastly different results. I thought those results were telling on the issue of calorie restriction.

The first study, a 1944 Ancel Keys study, severely restricted calories in 36 men in order to observe the effects of starvation. He fed his subjects a restricted calorie, high carbohydrate diet for twenty four weeks. The macro-nutrient breakdown looked like this: 25.5% protein, 17.2% fat and 57.3% carbohydrate. The subjects demonstrated lethargy, depression, feeling cold, bleeding disorders, swollen ankles, food obsession, and other more serious psychological disorders. (You can read about the study in detail in the book The Great Starvation Experiment.)

The second study, a John Yudkin study, attempted to show that a low carb diet provided ample nutrients. The carbohydrates were kept strict each day but subjects were asked to eat “as much meat, fish, eggs, cheese, butter, margarine, cream and leafy vegetables as they wished.” Their average macro-nutrient profile looked like this: 21.3% protein, 60.6% fat and 17.1% carbohydrate. The 11 subjects in the John Yudkin study volitionally consumed the same number of calories as those in the Ancel Keys study, but the calories came from totally different sources. No symptoms of starvation were reported and, in fact,

“none of our subjects complained of hunger or any other ill effects; on the other hand, several volunteered statements to the effect that they had an increased feeling of well-being and decreased lassitude.”

The effects of “calorie restriction” in these two studies are startlingly disparate. Eating the same number of calories one group starved while the other thrived.

Is it just calorie deprivation that causes starvation (obviously true at some point) or is the quality of food to blame?

Dr. Eades discovered, while comparing the results, that the calorie restricted, low-fat subjects were lacking cholesterol and saturated fats which we know contribute to elevated mood. According to Chris Kresser (and like everyone else that has woken up),


“Cholesterol is needed for proper function of serotonin receptors in the brain; low cholesterol levels have been linked to aggressive and violent behavior, depression and suicidal tendencies.”

I might be totally missing something here and I realize the John Yudkin study was one small study, but it is perfectly in line with my own experience. My calories are restricted in general – I just don’t think about eating all that much and don’t usually eat huge meals – and I am not irritable, angry, bleeding, or swollen and, in fact, am quite calm and easy-tempered. Is this not true for most of us Primal people?

Unless I am mistaken, these studies are bunk, as are most studies researching nutrition based on the Standard  American Diet. Until I see some calorie restriction studies done on subjects eating more like me, I’m not going to pay any head to the warnings against it.

« It’s Bedtime. Turn Off the Night Light! Intermittent Fasting – Is It Safe For Children? »