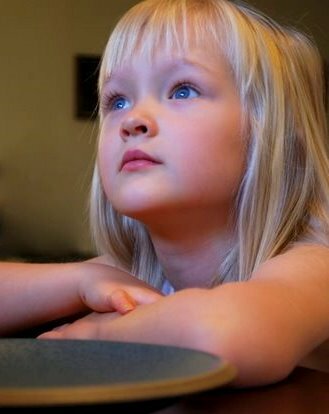 Ongoing deprivation is certainly not something you want to impose upon your children, but it can be a great relief to know that when kids skip meals they will be fine.

Kids aren’t going to starve themselves and they aren’t going to fall behind in the weight and height percentiles just because they didn’t feel like eating breakfast this morning. There are a number of reasons to allow and even encourage kids to skip meals from time to time.

What’s So Great About Fasting?

Intermittent fasting is almost like a silver bullet against disease and aging. Without any alteration to the types of foods one eats, intermittent fasting has the power to increase longevity and quality of life by reducing brain insulin signaling, lowering triglycerides, fighting cancer cell rejuvenation, stimulating the production of growth hormone, and kick starting cell repair and waste elimination. (Note that calorie restriction produces many of the same affects but is widely shunned. Read more about this in my article about the science behind calorie restriction.)

Despite its many benefits, however, people often dismiss it, thinking they can’t handle the gnawing hunger. Without a doubt, fasting can be challenging for people eating an average modern diet, but it’s actually pretty easy once you’re already benefiting from the metabolic advantage of a reduced carb diet. When our bodies are efficient fat burners we don’t experience the “blood sugar blues” and barely notice the temporary caloric deprivation at all.

Intermittent fasting actually gives me an energy boost. Skipping a meal makes me sharper and more alert. It seems counter-intuitive but ghrelin, the hormone that makes us feel hungry, “enhances learning and memory” while at the same time makes us ready for action. J. Stanton reveals the brighter side of ghrelin in this short article.

How to do Intermittent Fasting

Intermittent fasting (IF) technically means to alternate not eating for some length of time with eating. There is no one way to reap the benefits of intermittent fasting. An IF schedule can be individually tailored as Mark Sisson describes in this How To article.

For example, a person could go 16 hours without food every day or take a whole day off from eating once or twice per week. Dr. Eades reported that he likes to fast for 24 hours from 6pm on the first day till 6pm on the next day so as to never actually go a day without eating.

Carlson and Hoelzel showed in their atricle, Apparent Prolongation of the Life Span of Rats by Intermittent Fasting that fasting every 1 in 3 days produced the longest life and conferred more benefits than other fasting schedules.

Personally, I don’t get super strict about my fasting schedule and I don’t think it makes much primal sense to do so. Food is not scarce on a regular schedule in nature. It definitely is scarce, though, sometimes. Occasionally every animal on earth experiences caloric deprivation. If we want to emulate the behaviors of our primal ancestors, then we too should go without eating from time to time.

Despite all of our attempts to mimic the physiology of our primal ancestors, many of us don’t even come close to having the metabolic efficiency and hormonal balance that our ancestors had. Some leaders in the field claim that fasting can help improve these processes while others claim that it can exacerbate them.

When We’re Not Ready for Intermittent Fasting
Robb Wolfe and Mat LaLonde discuss the cortisol increase (at about 18 minutes into the podcast) that can result from intermittent fasting in people who follow a super low carb diet or partake in high intensity workouts. Robb says that the situation is even worse when people don’t take breaks, don’t sleep enough, don’t get enough sun, and have stressful relationships.

Mat LaLonde reveals that he does a protein fast in the mornings. Rather than fasting all together he has a can of coconut milk upon waking. He says that if you eat a little fat but refrain from eating protein you will,

“still get some of the benefits of intermittent fasting, still get the autophagies (our self cleaning system) to turn on but not necessarily stress the system.”

Chris Kresser agrees that fasting can be stressful in people with poor insulin control, since fasting can elevate cortisol levels resulting in elevated blood sugar levels. He notes that many people switching over to the Paleo diet come from a background of high insulin and are at a higher risk for fasting’s potential negative effects. Waiting for the benefits of IF to kick in can cause a cycle of high insulin and cortisol. If this is the case, quit IF for a while, allow the body to heal, and then try again.

Children Can Fast Too

When physically active children become absorbed in play, food becomes no more than an annoying disruption to their games. Coming in for dinner seems another dumb thing parents make them do. But even children won’t let themselves starve. Our bodies are designed for survival. While we all have observed children whittling away the hours, not so much as a thought on food, they are perfectly capable of regulating their own appetites.

Fasting in Paleolithic Times
It is a little narrow minded to assume that children have been eating three squares since the dawn of time. Life isn’t so easy outside of our opulent kitchens where refrigerators, boxes, and cans unnaturally prolong the shelf life of food. Hunter gatherers actually have to leave their camps to kill or gather foods, collect materials for a fire, return to the camp to light the fire, and then wait for their catch to cook. I’m guessing this ordeal takes a little longer than it takes to open a box of cereal and pour pasteurized milk over it.

J. Stanton just published a great article this week about hunter gatherers skipping breakfast and says that skipping lunch is probably even quite normal. 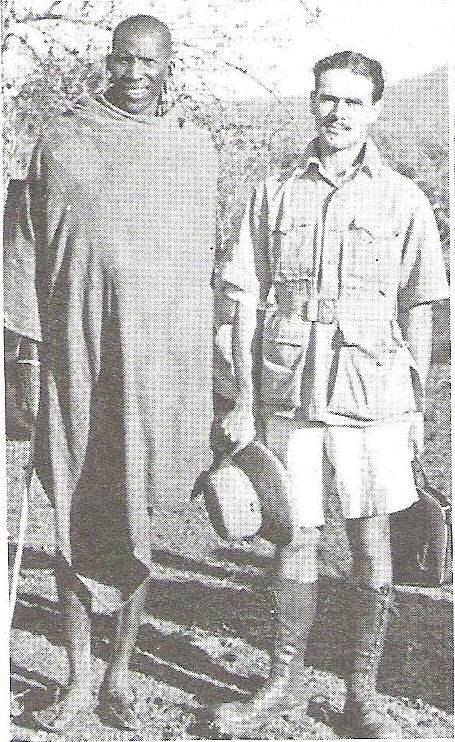 The guide standing next to the Masai man is six feet tall.

The Maasai people of Africa generally eat two meals a day – in the morning and at night. The Masai are exceptionally tall people and some of the healthiest that Weston Price observed in his study of traditional peoples in the early 1930s. This was before modern foods had been introduced into the diet of the Masai.

Clearly, their bodies don’t lack nutrients. They eat plenty of food at meal time. They aren’t calorically or nutritionally deprived. They merely condense their intake between longer intervals.

Intermittent fasting does not significantly reduce calories. In fact, the object of intermittent fasting is not caloric restriction. Regular large, high nutrient meals satisfy a person’s nutritional needs and provide the building blocks needed to grow. Not only does fasting not stunt growth it increases growth hormone. An increase in growth hormone can actually boost a child’s height making them grow taller than they otherwise would.

The effect of boosting or at least maintaining average height of mammals while fasting was observed in one of the most famous studies done on rats and intermittent fasting called Apparent Prolongation Of The Life Span Of Rats By Intermittent Fasting. The study was performed with baby rats.

“The fasting was begun at the age of 42 days and was continued until the rats died.”

Rats are not fully grown until 6-7 months of age and have an average life span of 2-3 years.

“In some cases, the average femoral lengths of the fasted rats at death were greater than, or equal to, those of the controls and, in other cases, the rats were only a little smaller. In short, intermittent fasting seems to make it possible to increase the life span to some extent without stunting the rats.” 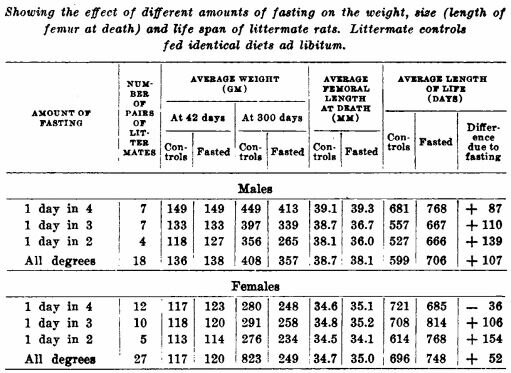 A Tradition of Fasting Through Illness
Traditionally, people fast when they’re sick, often called a cleanse. The same trend is observed in animals both domesticated and wild. The healing mechanism is called autophagy.  Alice Villalobo describes how autophagy benefits our cells.

“Scientists have observed that cell debris—proteins and organelles—gets encapsulated by tiny rearrangements of membranes and moved into empty spaces called vacuoles. The transportation of the cell debris is a pathway now called “cytoplasm-to-vacuole targeting,” or the Cvt pathway. Autophagy is the sequestration of the cargo material, bulk cytoplasm or specific organelle within double-membrane structures and its delivery to the vacuole for further degradation.”

It almost seems abusive to prohibit the process of autophagy in children by denying them the right to fast. While children may not need to fast for as long as do adults, the benefits and safety of short, intermittent fasting has its roots in the history of traditional cultures, illness, and even in religion.

Examples From Religion
You don’t have to be religious to see the value in fasting – primal man definitely wasn’t an Orthodox Christian – but these days religious people are about the only ones among us who offer the practice to their children.

In an article called Teaching Our Children to Fast the author writes,

“To teach fasting to our children at a young age will help them in years to come to control themselves in many ways,” and “Fasting from food lowers our energy level thereby making it easier to pray and be more contemplative.”

Religion aside, the value in fostering discipline and compassion through restraint and quite contemplation is clear. Fasting helps to strengthen the control of impulses and helps encourage good behavior.

In Orthodox Christian churches, children over the age of 7 are expected to observe the Assumption of the Holy Virgin, which is a fast lasting 16 days in the month of August. Islamic children are not required to fast until adolescence but they are encouraged to start as early as six in order to prepare for it. They are given the option to for an entire day or just for a meal. They are praised when they make it any length of time.

Cultivating Fasting Habits in Children
Religion offers some valuable insights for Primal Parents – that teaching children to fast is a process and that it is actually possible. Kids don’t have to start out strong. At first they learn about the idea. Then they may try going without an afternoon snack.  Next, they may try postponing breakfast a little while, until finally skipping an entire meal.

It is wise to teach children restraint with food in a society of gluttony. Teaching disciplined eating habits is one way to do this. Of course, if they are forced to fast, or themselves choose to fast for too long, the intended affect of placing distance between themselves and food could be reversed.

I think parents will find that if they simply offer the idea of skipping meals here and there, abstaining from food when not truly hungry, or taking a break from food to be calm and reflective, a child’s body will guide itself into a natural rhythm of intermittent fasting.