Baby wearing around the world

Have you ever noticed how calves, horses, and dogs – to name a few – can stand up almost immediately after being born? Isn’t it interesting that these animals who are significantly less intelligent than we are have such superior coordination at birth? The answer to this seeming mystery lies in the fact that, ultimately, human brains have a much longer path to maturity.

The Task of Building a Large Brain Retards Physical Growth

The progress of a developing animal body is proportional to the development of the animal’s brain. So the brains of calves who hop right up when they’re born are at further point in development than the brains of humans when we are born, laying helplessly in our mother’s arms. The reason these animals are more developed than humans are at birth is because they will experience less brain development overall than we will, and so they complete their full brain development faster than we do. This translates to mastering physical milestones faster.

All animals, regardless of their ultimate brain size potential, take their first steps at basically the same point in brain development. This means that the brain development of a newborn calf is about as far along as that of a one year old human’s brain at birth. This doesn’t mean, however, that cows are smarter than people. Cows just won’t have nearly as much brain to develop in the end so the process is quite a bit quicker. Human babies will develop larger brains than four legged animals, and with that comes more skills to master, such as language and hand-eye coordination. This takes a long time, comparatively.

For example, it takes a whole year for human babies to catch up and take their first steps; it takes 5 months for chimpanzees, and 1 or 2 months for vervet monkeys. But this is only because a human brain is simultaneously developing in areas that vervet monkeys as not.

Why Humans Start Out So Underdeveloped

According to Archaeologist Timothy Taylor, larger brained, somewhat upright animals, like primates, had to overcome the problem of birthing large heads from relatively small pelvises. The problem is even more pronounced in humans whose pelvises are dramatically narrowed due to their fully upright stance. Consequently, humans evolved to give birth while the baby’s head is still small and the brain underdeveloped. This allows for the brain and head to continue growing outside of the womb.

For some perspective, the weight of a non-human primate newborn brain is around 42 percent of its adult weight (i.e. it doesn’t have far to go before it reaches full development), while a human baby’s is a measly 29 percent (i.e. it has a long way to go before it is fully developed).

Babies are born with stunted brain development overall because there is more brain that needs to be built in the end. Each developing region of a non-human brain is not so complex as ours and so does not take as long to fully develop. In humans, since the brain is not well developed at birth, the body is not well controlled by the brain. Consequently, the body waits for the brain to catch up.

But how is it that humans have been able to get away with birthing such high maintenance babies? Humans have to travel, hunt, gather, take care of their homes, and sometimes quickly flee. How could they manage all of these demanding tasks with a delicate, helpless creature to take care of? The answer lies in the baby sling.

Due to the fact that humans are born helpless, they require a period of intensive neonatal care unlike any other animal on earth. They must be constantly supervised as they cannot yet follow or imitate their mothers. Human mothering is not a passive affair as it is in some species since human babies are entirely dependent upon their mothers. As the human brain was evolving to be larger and smarter, and babies more helpless, Paleolithic females came up with a solution to this nearly debilitating predicament. They created the baby sling.

When our early ancestors came down from the trees and started eating, preparing, and hunting meat, the human brain started to grow. As the brain became larger and we started standing upright it became more difficult for our babies to fit through the birth canal. Humans, already adept at using tools, rose to the challenge of infant helplessness and created the baby sling. It was this invention, claims Timothy Taylor, which facilitated the continued evolution of large brained hominids, ultimately culminating in the emergence of language.

About 2.2 million years ago (Timothy Taylor has analytically dated this back 2.2 million years. There are no relics of cloth from that long ago) the development of the human species was ready to explode. Here’s why: The baby sling allowed for a longer period of helplessness. It gave the developing baby the chance to take in information about the world from a calm, safe, and organized perspective. The rhythm of walking and heartbeat that a baby feels while in a sling bears some resemblance to gestation. In a sling, a baby’s energy can be channeled into physical and behavioral development. While a baby is in the sling it can observe the world around it and learn a great deal.

As Dr. William Sears has himself said, “carrying humanizes a baby.”

What Happened to Baby Wearing?

A stigma grew around the ability to leave ones baby alone versus the need to carry it around. Poor, working mothers had to carry their babies while they cooked and cleaned. Rich mothers could leave their babies virtually unattended in a crib while socializing or doing other activities that the poor could not afford to do, in rooms that the poor could not afford to have.

Even today, all around the world, carrying a baby is often still associated with low social and economic status. Baby slings were replaced by strollers, baby swings, bouncers, and walkers. This trend is worldwide as countries become more Westernized. However, with the resurgence of interest in the ancient practice of baby carrying, mothers of all classes are again beginning to nurture their babies with this ancient human practice.

Baby Wearing Finds Its Way Back Into Modern Culture 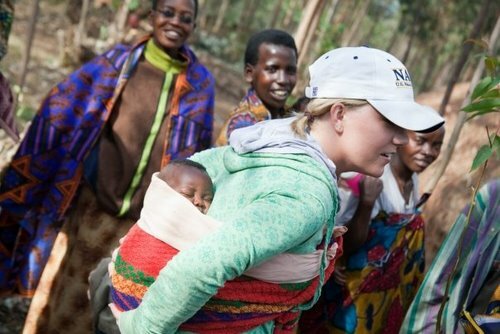 Westerners learn to use a baby sling

Carrying a baby in a sling was popularized in the United States by Dr. William and Martha Sears in 1985. The Sears’ noticed how cultures around the world regularly carried their babies and that their babies seemed more content.

As a result, the Sears family tried it out on their own kids and it worked miraculously. They reported that the more they used the baby slings, the less their babies cried. The husband and wife duo created a baby sling for sale and coined the (now trademarked) term “babywearing”.

Consequences of Abandoning this Behavior

I think it is obvious from the list of benefits of babywearing that there may be some consequences of abandoning the sling in favor of a carriage and a crib. It may even be that many of the behavioral and emotional problems, the attention deficit, and lowered intelligence which many thousands of children experience these days are a direct result of having less physical contact with their parents in the first two years and a lack of the safety and rhythmic movements felt while being left to lie alone. If carrying a baby helps to build independence, intelligence, and calm, then what might happen to a baby and the baby’s brain development when this tradition is removed?

Which Style to Choose

There are so many styles of baby slings, backpacks, and carriers to choose from these days. I used many of them when my daughter was growing up but my favorite was the Ergo. This backpack will carry a baby from birth through 3 or 4 years old. Yes, really 4 years old! It’s not as difficult as it may seem to carry a kid that age because you build the muscle as they grow. 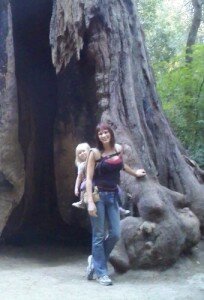 A long day hike through the redwoods 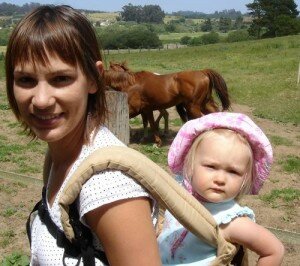 Thanks to the Ergo, I took her everywhere

« A Dirty Kid is a Happy Kid! Why Everyone Should Play in the Dirt The Comprehensive Guide to Curbing Food Cravings »