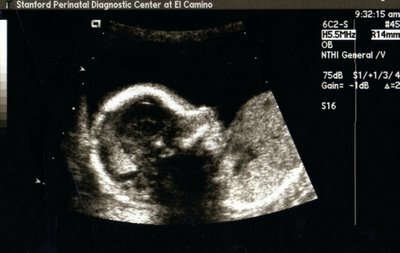 Ideally, preparing for conception begins at least six months prior to the moment of implantation. It rarely works out that way, however, and it definitely didn’t work out that way for me. In the days of my grain-based, packaged-food-centered diet I suffered from my share of conditions, one of them being polycystic ovarian syndrome (PCOS) and infertility.

In my case, the infertility was more of a blessing than a plague. I didn’t want children anyway so it was pretty cool not having to worry about birth control.

I read quite the lineup of worthless “health” guides before finally stumbling upon Dr. Loren Cordain’s The Paleo Diet. The concept of eating according to evolution immediately resonated with me. I was 100% compliant within the first week.

That’s not to say it was easy. On the contrary, throwing out the entire kitchen of packaged foods was tough, really tough and, over the years, I have both failed and triumphed and have recovered from a lifetime of malnutrition.

My body could have used a year or more to build up nutrient stores but, much to my dismay and surprise, my hormones balanced quickly and within three months I was pregnant. So much for my good old “natural” birth control.

I was a math tutor back when I was pregnant so I had a lot of spare time. I spent that time reading about pregnancy and parenting, I started practicing relaxation, I walked five miles a day, and got so into cooking I nearly wrote my own paleo cookbook (but with so many great ones out there already I didn’t bother).

I was totally excited about getting healthy for this baby and finally, for once in my life, actually feeling good. I didn’t smoke, didn’t drink, didn’t take caffeine. I ate eggs every dayand made beef stews every day. I didn’t eat out at restaurants and I didn’t eat grains or sugar.

The effort paid off.

I had an enjoyable, healthy pregnancy. My mood was even most of the time, my energy was high, I didn’t experience cravings, and I didn’t gain a ton of weight.

My childbirth experience was kind of a flop. We went to a hospital which boasts a 30% cesarean rate and within five minutes of arrival, I was told that my daughter’s cord was wrapped and the only solution was to cut her out.

This sounded crazy to me. I had read about cord wrap. I knew this wasn’t the only way. After some arguing with the doctor (who was just some random on call doctor and not the one I had been seeing for the last nine months) they agreed to give me a little time for the cord to work itself out but not without all kinds of drugs to “assist the process”.

Doctors in the US aren’t trained in much more than cutting and pill popping so, needless to say, the whole mess finally ended in emergency c-section.

Evelyn was born and I recovered quickly, so quickly in fact that the doctors were shocked. I was up and walking the next day (albeit slowly) and back in to an exercise routine within a couple of weeks. My 4 inch scar is almost totally invisible, thanks to my nutrient dense diet. And my mood never crashed at all. Having spent a lifetime with poor wound healing and severe depression, this was quite an unexpected blessing.

During the four days in the hospital I kept my daughter, Evelyn, with me in a little cradle beside my bed or in my arms feeding her the colostrum that’s produced before the milk comes in.

According to every single nurse that came through my room in those four days, I produced an inordinate amount of colostrum. Most women produce little dribbles of it. Colostrum is so high in fat that it doesn’t take much to satisfy a newborn. I seemed to produce the “liquid gold” in bulk. The nurses joked about pumping the stuff out and donating it to mothers who didn’t produce enough of it. My baby had a steady supply of this high medium chain fatty acid, antibody rich first food. This would be my pattern for the next year and a half. I produced so much milk I could have put Enfamil out of business.

I don’t know why I produced so much of it while other women are lucky to spurt out just a few drops but what I do know is that the foods we eat make up our breastmilk and it is important to eat as healthily as possible.

Evelyn was a strong baby. This is common in babies who are breastfed by mothers who watch what they eat. She was also calm and rarely cried. This is common in babies who are carried in slings and who co-sleep with their parents. I was blessed with an easy baby. Some of this might be due to her personality but more likely it is due to many factors. My diet during pregnancy and breastfeeding, my fitness level, my own calm disposition, our practice of attachment parenting techniques.

And she has grown up into a good kid. She has always been very coordinated and strong. She didn’t get her first cold until she was 2. She’s never taken any kind of conventional medicine, not even Ibuprofen – and her blood is not laced with the mercury and formaldehyde found in a vaccine syringe. All of these factors play a role but, of course, there are many reasons we turn out the way we are.

I allowed Evelyn to nurse whenever she wanted. She slept in bed beside me (and no I didn’t ever roll over on her!). I didn’t leave her to cry to toughen her up. I carried her against my body in a backpack much of the time for the first 2 years. These are all principles of attachment parenting which seem in line with the ways in which our Primal ancestors would have had to have raised their babies since the beginning of time. There were no kid’s rooms in the cave, there were no cribs to leave kids in, carrying babies freed the mother’s hands so that she was free to live some kind of life.

When my daughter was about six months old I started adding solid foods to her diet. At first I had no idea what kinds of foods were right for babies. Rice cereal is the “typical” first food but I couldn’t feed her something which I wouldn’t even eat myself! So I started researching. I discovered the Weston A Price Foundation and Sally Fallon’s book Nourishing Traditions (which is a great resource even though it includes fermented grains and raw dairy, neither of which I eat).

I decided to keep her diet mostly raw, high fat, low carb, and densely nutritious. She ate things like avocado, raw liver, fruits and vegetables blended with lots of butter, raw fish, and home made chicken and beef soups made with bones. I happily breastfed for a year and a half.

Feeding a kid under two was easy because I controlled what went in her mouth. She never whined for sweets or junk food or juice boxes because she had never tasted them. Babies will never cry for cookies, will never throw tantrums for more junk, will never eschew a real dinner if they never get addicted to junk food in the first place. It is such an incredibly simple concept that many parents of our culture, unfortunately, miss.

Over all these years I have had a steady flow of moments reminding me that even in the face of opposition I did the right thing by choosing to eat, breastfeed, and feed my baby like our Paleolithic ancestors would have done.